Contest Tutorials Upcoming Features Blog FAQ Help
MANU Blog #2:
"Hard Landing" tech demo and AI bots creation
This time, we would like to talk about out various goals for us while we were creating "Hard Landing" tech demo. We would also specifically talk about AI bots and its specifics. In the last part of the blog, we would talk a bit about future updates and its content.
Hi guys,
However, one of the most interesting features of "Hard Landing" is its 4 types of AI-bots, which we named Sniper, Minion, Windowmaker and Vulture. Let look at their special features more closely.
Sniper is the most advanced AI bot in the tech demo. He is carrying a pistol and a rifle, and is able to shoot at main character Patrick. If he is reaching Patrick in a close distance, he can make powerful melee attacks. Sniper can also jump from platform to platform to change height and pursue game protagonist. Finally, Sniper is capable to coordinate his attacks with another Sniper enemy, which makes him even more dangerous. 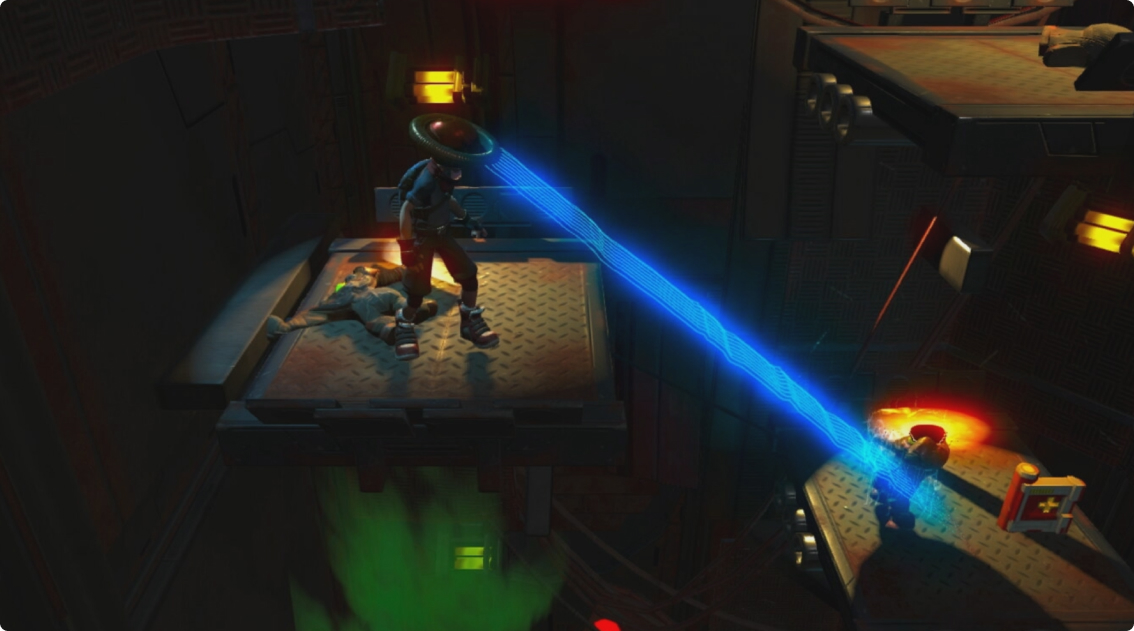 Let us know if you have any questions about bots and game mechanics. Talk to you soon!
There are a few things, which we wanted to demonstrate as highlights to our new Update 1.1 features.
New mechanics included creation of in-game cutscene, vehicle and its control, switching of different game modes and view perspectives, simple box puzzle, and, of course, different AI techniques.

As always, all these mechanics are created without coding. We rely on animation engine and trigger system, which allows you to reach same results, as with programming, but faster and more comfortable. For example, it is quite easy working on a cutscene in Manu by using its animation system, the process is quite like creation of a movie in video editors.
Minion is relatively more simple type of enemy. His AI allows him to walk between two positions, turn around and throw grenades and 'black hole' energy weapons at Patrick. 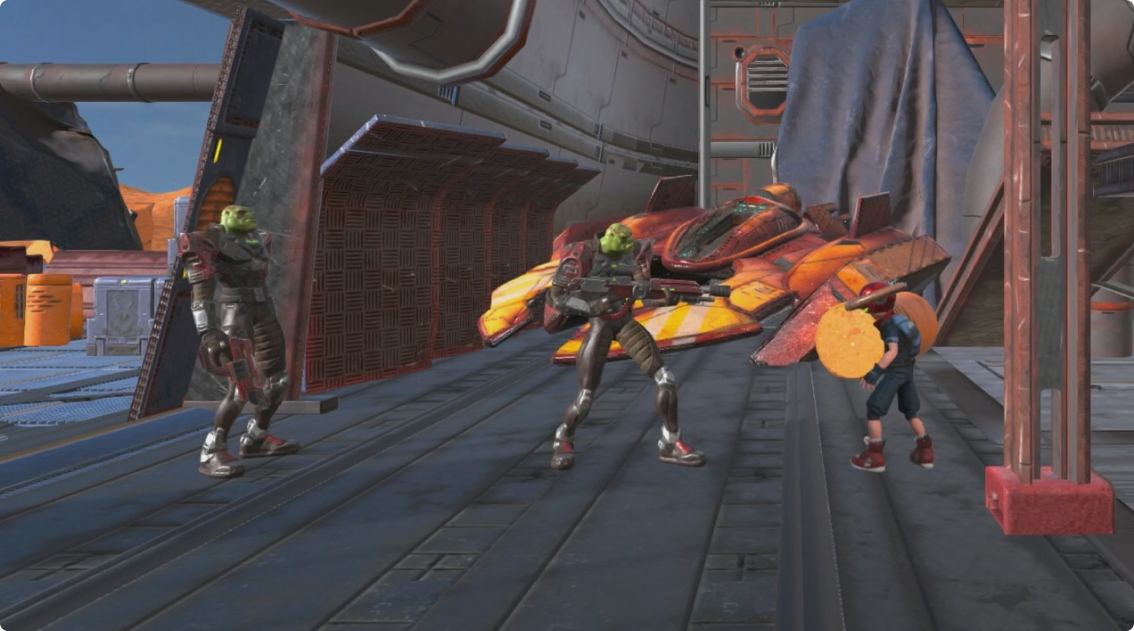 Widowmaker is a spider-like enemy in the tech demo, and he has his own two types of attacks, which varies depending on where Patrick is currently is. Widowmaker depending a lot on MANU trigger system, which allows us to make him a formidable and smart enemy. 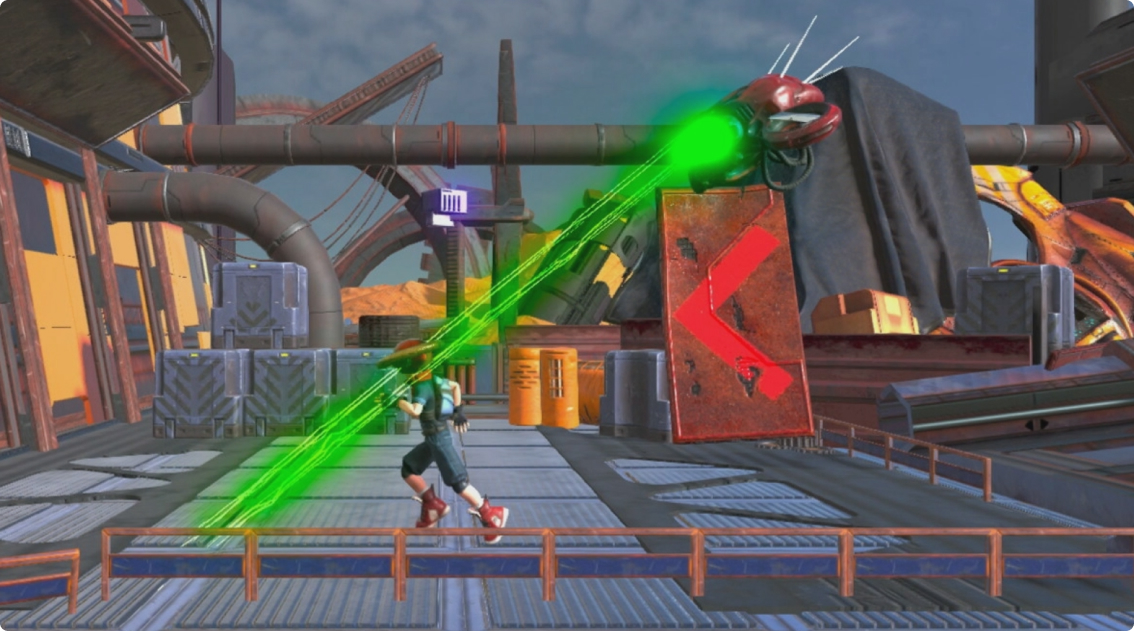 Finally, we have Vulture droid. It is using laser arrays to shoot at Patrick, but also moves very fast, so it is hard to avoid his attacks, and not easy to defeat him. 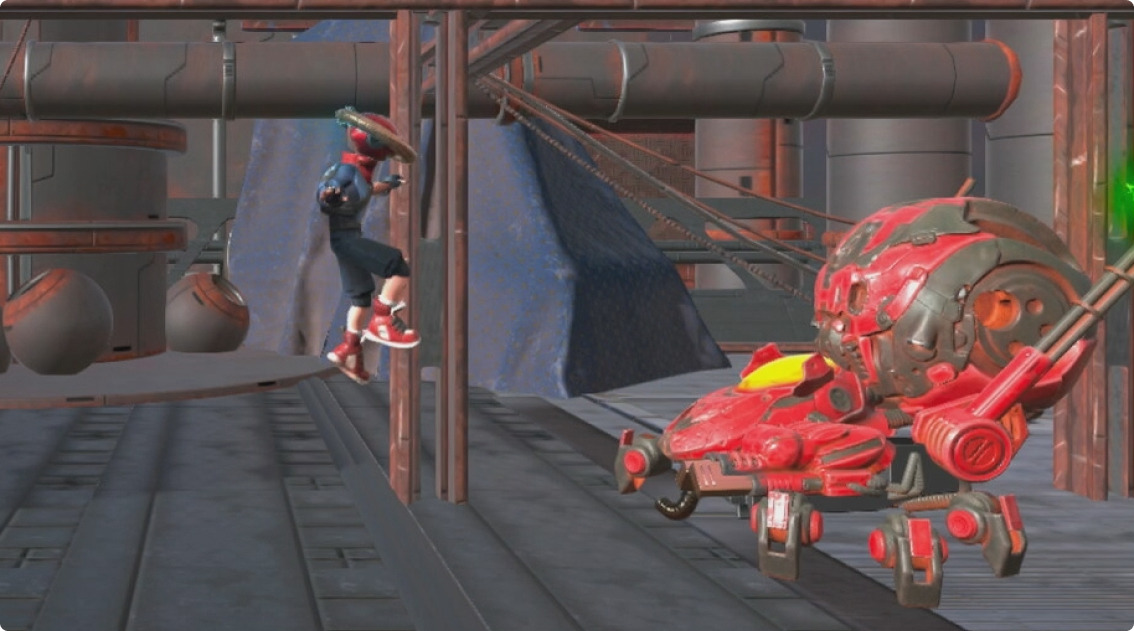 Both Sniper and Minion are a humanoid-type of enemies, so we used some ready to go animations from Mixamo. Windowmaker and Vulture use custom animations, which we created specifically for "Hard Landing" in MANU.
We are also happy to mention all the enemies different defeat animations, which we used in tech demo.

To summarize, MANU allows you to make quite a roster of different AI or NPC characters, which could be very mobile and include advanced patterns of reaction to game protagonist. Again, you do not have to code any AI behaviors, just set triggers and animations according to your needs. Moreover, it is easy to try something and even redo if you later feel like something should be different. However, the current downside of the system – you would need to be very patient and put your back into it to achieve great results. Which is why we are making it even more simple in future updates, when we will introduce state machines. Our ambition is to allow you to comfortably create very advanced AI bots, such as, for example, MGS 5 enemies.

Also, you might expect features such as AI behavior roster, which would give you ready to use bot functions. All you need to do is set necessary path for the object and it would create all the necessary animations.
Finally, let us talk about some other features we are working on.
While 1.1 update is still focused on platformer games and side scrolling, we will soon introduce popular features of 1st person and 3rd person view.
And yet, in "Hard Landing" we already testing how 1st person view and weapon is working, as Patrick finds special helmet and using it to shoot enemies from the 1st person view.

We are going to implement new rendering, switching from OpenGL to Metal for Mac and iOS, DirectX 12 and further versions for PC.

To make MANU even more accessible and easy, we would introduce specific tools to analyze and fix your projects, including plugin search and Realtime animation or parameter analysis.

These are tough goals, and it is even more ambitious as we are going to speed up the development and release our updates much faster. Meanwhile, you can expect more tutorials and education materials soon. And, of course, you can always find ome help and advice at our Discord channel.

Community
Become a part of our community on Social Media to stay tuned for the upcoming updates and the latest news from our team!